If asked to describe myself it is inconceivable that my relationship with the arts would not figure somewhere in that description. Without this my world would be one dimensional and monochrome. And I would be someone else. (1)

As with other aspects of identity, early experiences have cast a long shadow. I was taken on my first trip to London’s West End theatre at the age of eight. The production was ‘Billy’ at the Theatre Royal Drury Lane, starring Michael Crawford. Based on the novel Billy Liar, this wasn’t a particularly typical outing for a child. I don’t remember anything about the production. What I remembered, was the sense of occasion. We dressed up. I was walking up wide red carpeted stairs to our seats. Being small I was closer to the carpet than others, and noticed this. Instructions were given (as they routinely were to children back then) to be obeyed once the curtain went up. I thought this was a novel idea – the curtain didn’t go ‘up’ at home!. I must sit very still. Be very quiet. And watch. To this day, this is what I do at the theatre. The sense that this is an occasion, to be fully engaged with, has never left me.

For some people its sport, which generally (with the notable exception of the London Olympics and the odd Wimbledon) passes me by. I have friends for whom their support for Manchester United or West ham is as much a part of their identity, as visual art or theatre is a part of mine. I have often envied the tribal benefits of sport, and I suspect there is a collective sense of belonging and camaraderie in being a Manchester United or West Ham supporter, that is distinctly absent from being a fan of Chekhov or the Tate Modern (no disrespect to Anton or the Tate).

Almost 10 years ago I saw an outstanding production of The Three Sisters at the Manchester Royal Exchange, a central theme of which is the yearning for a life elsewhere, to the detriment of the present. In the case of The Sisters, an overwhelming yearning for a return to ‘life in Moscow’, seemingly unaware until relatively late in the proceedings that they are sacrificing present happiness for a ‘return’ to an imagined future. The sisters are exiled, not only from Moscow, but in their yearning for a future always beyond reach, from the potential of their present. At the time, I was living in one city, in a state of almost perpetual ‘waiting’, to return to another. I had made the decision to return and was working towards that reality, but daily life was coloured by the sense that ‘Manchester was not forever’ and somewhere else was ‘real’. I had a life everywhere, and nowhere, in a present I could never fully inhabit. When towards the end of the play, it becomes clear that the sisters will never return to Moscow, and the only reality (and therefore happiness) is the present – the resonance with my own life hit me with a shock that was both physical and lasting. 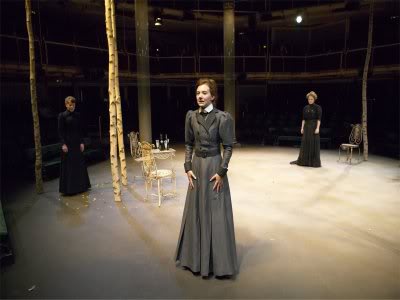 I am a Chekhov fan and I have seen other productions of The Three Sisters, yet I don’t remember them. The 2008 production stays with me because it was at the Royal Exchange. My favourite building in Manchester, a central part of my life in that city, and a place of pilgrimage when I return. And because the theme of the play reflected my personal experience at the time. In the remaining two years in Manchester, I lived differently and deliberately in a way that did engage with the present -and life was better for it.

Was I changed by that theatre performance? Imperceptibly so to the external eye. But yes, I was changed. The Arts are at their most powerful when we see both the wonder and bleakness of life, our choices, and ourselves, reflected. They speak to us of our own experience, and because of that we feel less alone. For those of us for whom the arts are an integral part of life, there is mystery and alchemy at the heart of this.

I have been visiting the National Gallery in London for over 35 years. Both for exhibitions and also spontaneously for some space and to breathe and reflect. Like the natural world visual art can be a great facilitator of reflection. Sometimes these reflective visits are to see pictures I’ve been seeking answers in the heart of, for decades. And like artistic critical friends they literally hang (in) there through each phase of life. Others are a reminder of specific times and individuals.

One of these is Steenwyck’s ‘An Allegory of the Vanities of Human Life’, a central message of which is the transitory nature of life. A postcard of this was on my wall as a student, back when I thought it at least mildly inconceivable that I would be around long enough to encounter a conventional middle age. Passing by the image now, decades later and heading into a different stage of life, I find it more than a little ironic. It still speaks to me, just differently. In contrast Gallen-Kellela’s ‘Lake Keitele’ will always remind me of a visit to the gallery with my half-sister during which we both admired the painting. We don’t see each other often, and as a reminder of a rare meeting, Lake Keitele is now, for me at least, a thread in the fabric of our story. 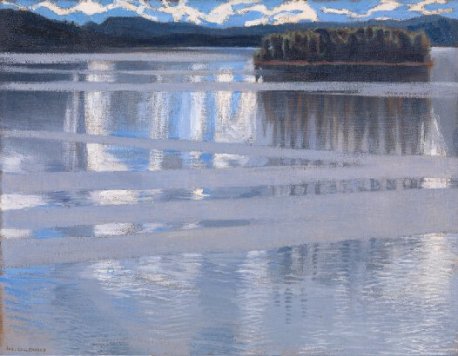 Making no value judgement about either, I have often said that personally I like my art ‘traditional’ and that I am not ‘into’ modern art (whatever it is). Yet there are three contemporary conceptual artists whose work engages me – Jeremy Deller, Tracey Emin and Grayson Perry. Both Emin and Perry are best known for their self-confessional work and the curation of their own lives as art, while much of Deller’s is invariably participatory. I was present for Deller’s inspiring ‘Procession’ in Manchester in 2009 –and his return this year for the opening of the Manchester International Festival with ‘What is the City but the People’ was literally a mancunian self-portrait. The work of all three is fundamentally about identity and connection. Sometimes the connection is more alive than others. Deller’s 2016 work (in collaboration with Rufus Norris) ‘We are here because we are here’ commemorating the centenary of the Somme, took both participation and identity to new levels. An army of authentically dressed trained volunteers appeared in locations throughout the UK. They did not speak. They occasionally sang – and distributed cards with the name of the soldier lost in that battle, that they were representing. My Great Uncle died in World War One, and one of these ‘performances’ took place in my home town. Identity and Connection. 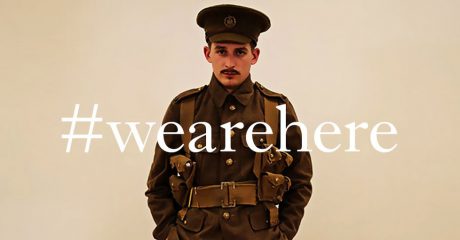 Music is another influence. I am a lifelong jazz fan, though nothing too ‘experimental’ (that’s jazz for you – tribes within a tribe). Jazz has been part of my life and identity both as a result of inheritance – when I was young it was what was on the record deck (remember those?) – and because like other activities it has been a backdrop to many of life’s key events. It has also delivered the miracle of hope in some dark days. There have been times of sheer elation, but also at least two days in my life when a close bereavement has occurred and I have been in a jazz club that evening, or the day after. For some it would be church but for me at such times there’s a compelling need to live, and live defiantly in the face of what has been taken. Jazz has delivered that, and much else.

© a-sense-of-place
When we hear a lyric that echoes our experience we know we are not alone. Others have loved, hoped, lost, and grieved, as we have. Though our hearts are often understandably arrogant enough to believe (as they should), that no-one has really known love as we have. Sometimes it will be a phrase, or the delivery of a song will that be exceptional, or poignant enough to reach us. Or the biography of the singer may bring additional meaning. In June this year I was lucky enough to be at the Royal Albert Hall for one of Tony Bennett’s concerts. At 90 Tony Bennett is undeniably a survivor and can still deliver a lyric like no-one else. In a venue that holds 5,000+ there was palpable love in the room for the last of the true greats of the jazz and swing era. But at a pivotal point in my life, after several years of doubting the future – singing only to me (of course) he made me believe ‘the best is yet to come’.

The Arts are part of our identity because we are changed. Sometimes this is because of a shared experience, but often it is a personal collaboration with the art itself. Even in a packed theatre amidst collective applause, our reaction is authentically our own, influenced by our personal heritage, and filtered through our reality.

1. ‘The Arts’ encompasses a huge range of activities and the boundaries of that range are not without debate and controversy. For the purposes of this post I am taking examples (specific and personal) from theatre, visual art, music and conceptual art.
2. Images from the National Gallery are courtesy of the Creative Commons
https://creativecommons.org/licenses/by-nc-nd/4.0/