As we leave November behind for another year I find myself reflecting on contemporary remembrance and its relationship both with art and our identity.

In my childhood, ‘poppy day’ was a fleeting affair. You asked for some extra pocket money to buy a poppy (plastic and paper with ‘Haig Fund’ stamped in the middle), in the week before remembrance Sunday, and you might have participated in a remembrance parade on the day itself. There might have been a lesson at school about ‘what the poppy was for’. That was pretty much it. At a time when many veterans of both world wars were living, and long before the casual vigilance and random terror of the post 9/11 world.

Now annually, in early November poppies are everywhere, beyond lapels, on cars, vans, bags, scarves. This year for the first time I saw a ‘poppy-decorated’ house, in a not dissimilar way as one might decorate it for Christmas. These participative acts of poppy-wearing, have also in recent years been accompanied by the articulation of remembrance as art, in part brought to centre stage by the Centenary of World War One and the work of its artistic arm 14-18 Now.

‘Blood Swept Lands and Seas of Red’ – between 17th July and 14th November 2014 saw the moat of the Tower of London gradually (and this was significant) occupied by a spreading carpet of 888,246 ceramic poppies (each of which represented a British military fatality). Over the months, as the installation grew, so did public interaction with, and support for it. I visited on three occasions – the first two of which were in the early weeks, and the last was in its last days. The difference was overwhelming. My early visits were timed to coincide with the inclusion of my Great Uncle in the Roll of Honour read from the moat at dusk each evening, preceded by the sounding of the Last Post. In these early weeks there were perhaps 100 people present each evening. From the many conversations I had there, it was apparent that most of those attending had a direct connection with one of the fatalities. Many had brought mementos and family stories, and a willingness to share on a deeply personal level. It was for them, as for me, a way of reaching down the generations to our (overwhelmingly) young ancestors who gave their lives in the face of horror beyond understanding, to tell them that it wasn’t in vain. We acknowledge your sacrifice. We remember. 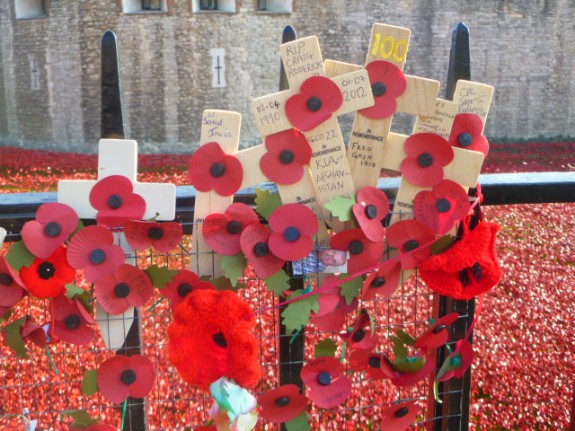 By its later weeks ‘Blood Swept Lands…’ had quite literally assumed a life of its own. The moat was full, as were all the vantage points, access to which from any direction was at shuffle-pace only. It was daily news, the subject of discussion in parliament, and firmly on the ‘tourist trail’. What began as an act of remembrance, had become an attraction to be witnessed, uploaded and shared.

In 2016 Canary Wharf became the first place in the UK to host a Remembrance Art Trail. Fitting given the Wharf’s location as a permanent home to one of the UK’s largest collections of public art. The Trail ran for two weeks with seven installations curated by Mark Humphrey in collaboration with the Royal British Legion and service personnel. The installations were radically different representations of remembrance. In particular the largest – ‘Boots on the Ground’ aimed to capture the spirit of the armed forces. Away from a main tourist site, the trail engaged a new audience and moved remembrance art and its curation as a destination, to a new level. 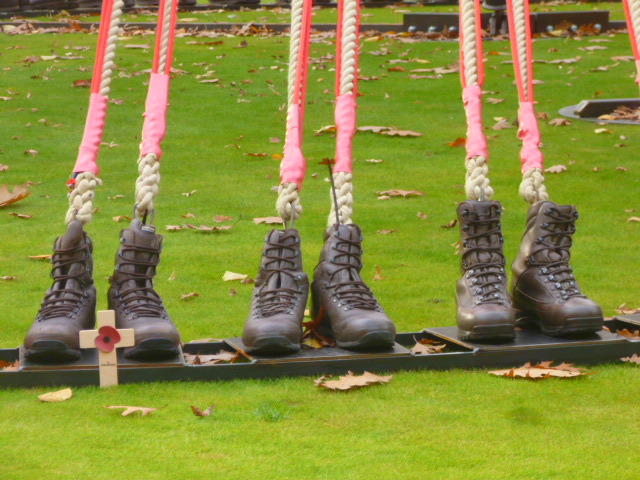 Boots on the Ground © A-Sense-Of-Place

Also in 2016 the centenary of the Battle of the Somme was commemorated by ‘We are Here Because We Are Here’. From 7am onwards on 1st July, 1,400 young men wearing WW1 battle dress appeared in (often contemporary) locations across the UK. They did not speak but occasionally sang a song from the trenches – ‘we are here because we are here’. If engaged by members of the public they handed out a printed card with the details of the fallen soldier they were representing. Reportedly, in Manchester, within half an hour of the process commencing, a ‘soldier’ had amazingly handed a card to a descendent of the individual named on that card. The power of this seemingly random connection across a century, is spine chilling.

‘We are Here…’ was particularly unusual, both as art and remembrance, in several respects. Firstly, it was not revealed until the evening of the day itself that the entire project had been the work of the artist Jeremy Deller and Director of the National Theatre, Rufus Norris. Similarly, its substantial three-year preparation was entirely secret. There was no element of advance marketing or publicity, as Norris has stated – there was ‘no sell’. This is almost unprecedented in art terms within which the building of an audience prior to the event or launch is key. There is also the sheer level of public awareness and engagement achieved within a single day. Statistics from 14-18 Now indicate that by the evening of July 1st 63% of the British public (approximately 30 million people) had some awareness of the work. Not withstanding the fact that the organisers had harnessed the help of key influencers, and that the work was a gift to social media, this is impressive. Finally there is the interaction with, and reaction of, the public. The volunteers participating in ‘We Are Here…’had been trained to expect and respond to potential aggression. What they were unprepared for was a level of public emotion that meant that many on encountering the ‘soldiers’ broke down and sobbed. Both shortly after the work took place, and more recently, Deller has publicly linked this out-pouring of emotion to political uncertainty at the time post the EU referendum. For me this is to significantly underestimate the power of our national connection with remembrance in general, and the iconography of World War One in particular.

My connection with remembrance has always been strong. Many if not most of my peers had parents who were born during, or immediately after, the Second World War. Mine were older. My father served in the navy during the war (though not technically old enough to do so) and my mother has vivid memories of the London Blitz. At least one Uncle also served, and my maternal Grandfather too young to fight in the first world war, found himself (to his great distress) too ill in the second, to be accepted front line duty, and served in the London Home Guard. In addition to the Great Uncle mentioned above, another (a lifelong pacifist), was a second world war conscientious objector, and served in other ways. I imagine we are not that unusual in this collective heritage.

These experiences, my father’s in particular, were frequently talked about, sometimes with an immediacy that belied their distance. It was commonplace to hear reference to an older relative having ‘been in the forces’. In spite of having been born decades later, I grew up in the long shadow of the world wars alive in my family, and the more immediate influence of the Cold War, with its terrifying and ever present nuclear threat. As a child, and particularly as a teenager, (that time of all in life when we are desperate to ‘fit in’), I resented this ‘difference’ from many of my peers deeply. It is only in recent years, with the benefit of hindsight (how wonderful that is), that I realise how lucky I was, to grow in the shadow of the generations that gave all.

The activities we associate with ‘remembrance’ are now mostly ‘commemoration’. We can no longer turn to direct memories of those who gave their tomorrows. With the passing of Harry Patch in 2009, the last surviving combat soldier in the trenches, of any country, died. And there are now very few living who were alive during World War One. In the decades to come we will inevitably lose that same connection with the witnesses of World War Two. Yet the further we are from the experience of ‘world wars’, the more central ‘remembrance’, has apparently become to national life and identity.

The decades of ‘peace’ have in part been anything but. Post 9/11, war is everywhere. It runs into the Manchester Arena with a bomb, through the streets of Borough Market with a knife, and in the hearts of those who believe hate is the answer. As a nation we may now be more consciously familiar with random loss, and mourning. It is also not surprising that we now ‘remember’ with contemporary relevance. ‘Blood Swept Lands…’ and ‘We are here…’, were literally made for the social media age. We articulate through the visual. If we haven’t seen it and shared it – and therefore participated in it (even if only by re-tweeting) – did it really happen?

In 2016 there were suggestions that the art of 14-18 Now, and in particular ‘We are Here..’ had the potential to grow popular support for increased public funding for the arts, at a time when this is clearly threatened. In 2017 there has been an emerging debate that perhaps there is now too much ‘remembrance’ and that the ‘message of the poppy’ has been lost. Are we now living in an age of art in the service of remembrance? Or remembrance in the service of art?. Or both? And does it matter?

I’m not sure it does. Every generation will remember and memorialise in its own image, for that is the path to relevance and engagement. However, connection to a world characterised by individual effort and sacrifice for the common good, still has much to teach us, not least about our humanity. That art can articulate and inform this connection, is only testament, both to its power to connect and transform, and its importance in our personal and national lives.